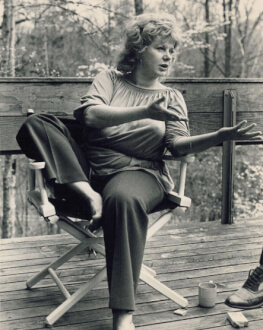 In a song sung by McElwee’s grandmother in the film, one of the lyrics tells the story of a “piccaninny” (a black child) who, while playing outside, feels extremely hurt when he is rejected by a group of white children. His mother eventually allows him to go out and play as much as he wishes but warns him to be careful and to "stay in your own backyard." McElwee's grandmother sings this Southern song without giving too much thought to the lyrics, and Ross suddenly understands that his "Backyard," here in the American South, is a symbolic place where in his own family black and white people interact, whereas in the workplace or in public spaces, interactions are very different. Still, even in his family, the backyard is a place for white people to unwind, and for black people to work in.

In this magnificent film, shot in the summer of 1978 when he was still a film student, McElwee starts to use his own "autobiography" to tell – with a keen sense of humour - a story about much more than just himself: a story about white masculinity, about a shared traumatic social history, about racial issues, about a common and complex Southern heritage. McElwee plants the seeds for his later works in this film where we meet with these preoccupations, with his unique style, and with many recurrent characters, and we cannot wait to encounter all of them again. (by Vanina Vignal)

Ross McElwee’s first film, which was also his graduation film at MIT, is built around the fiery personality of Charleen Swansea, his friend and former high-school teacher. She lives and works in Charlotte, the filmmaker’s hometown, raising her two kids and putting her artistic talent, which she nourished alongside such personalities as E.E. Cummings and Ezra Pound, to the service of her underprivileged students. Although the influence of Richard Leacock, one of the central figures of direct cinema and her professor at MIT, is felt throughout the film, Ross McElwee takes a polemic stand to the “fly on the wall” concept: whilst some scenes are purely observational, many others owe their emotional impact precisely to the trust and friendship shining through between the person in front of the camera and the person behind it. Far from seeking to make himself invisible, McElwee relies on the impulse to perform manifested by his subjects under the camera’s eye, thus displaying a more granular understanding of the idea of human truth - a truth that can only be intuited based on the masks behind which everyone chooses to hide. The act of filming Charleen - which he would do again countless times in his later films - also seems to have convinced him that focusing on one individual’s subjectivity is a privileged way of discovering the person’s community, and his first person filmography is nothing but a honing of this formula, tested here for the first time. (Liri Alienor Chapelan)