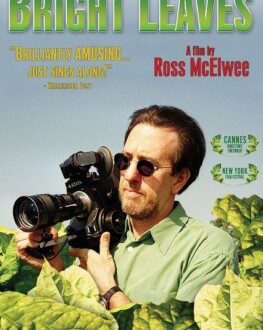 Sometimes, an autobiographical quest can lead to unexpected revelations. What if you learned, like Ross McElwee did, that the life of your great-grandfather, one of the ruined tobacco magnates of the romantic 19th century, is supposed to have inspired a character played by Gary Cooper in Michael Curtiz’s (the director of the legendary “Casablanca”) classic Hollywood film “Bright Leaves”? And what if you became so obsessed with this idea, that you embarked on a detective quest, often met in failure, which you wouldn’t mind and you’d just carry on, in the hope that you would eventually discover something of utmost importance to yourself? This represents the premise and the structure of the documentary, also titled “Bright Leaves,” which not only traces the filmmaker’s quest to solve the mystery, but, most of all, lays out the hypotheses and connections he makes between all sorts of events in order to reach as much of a specific outcome as possible. At some point between meetings with Patricia Neal, Gary Cooper’s partner in the Hollywood film, between searches through archives and emotional conversations about the harmful effects of tobacco not only on the public, but also on the families of the large producers in North Carolina, finding the truth about the relationship between the classic movie and reality stops being essential. The journey is so captivating, that you wish it never reached resolution, and for McElwee’s quest to continue on forever. (by Andrei Rus)