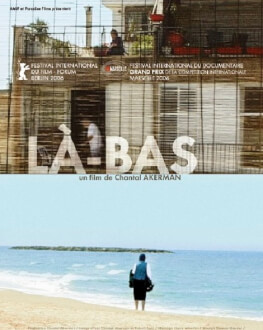 “It is difficult to get out of prison, especially out of your own prison,” says a man whom Chantal Akerman quotes towards the end of "Down There," a film in which she spends a month on her own in Tel Aviv, in a friend's apartment by the sea, without almost going out at all. She films what she sees from the apartment window, often through the curtains, with no intentions defined in advance - before arriving here, she did not know she would feel this urge to film. Then, she wanted to open herself up as much as possible, so that something she had not known before could become visible, and she tried to ensure that things would take their own course, without involving too much of her own subjectivity.

She invites us into her confined space, to watch alongside her the everyday lives of her neighbours on the balconies and terraces of the opposite building. We never see her, but we can hear her moving around, cooking, brushing her teeth. Claire Atherthon and Chantal Akerman edited her voice-over, and we hear her reflections on exile, on suicide, on her childhood in Brussels, spent indoors with a mother too scared to let her out, on her Jewish identity, on depression. We travel with her on this journey into the present and the past, through a world of memories, realising, in the end, that what we are seeing is a unique self-portrait of a woman, who is sharing with us the inner turmoil imprisoning her. (by Vanina Vignal)