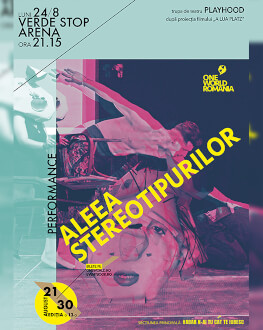 In a Paris suburb, two men in a car make frantic phone calls to figure out a place where they could spend the night: this first scene in the film, which repeats itself in thousands of versions throughout Europe every day, encapsulates the immigrant Roma experience of the past few decades. In France, where Jeremy Gravayat produced his documentary, Roma have fallen victims to mass deportations, forced evictions from houses and informal encampments, as well as inevitably racially charged gentrification plans. In 2017 alone, 11,000 Roma were forced out of the places where they lived without being offered alternative accommodation. Out of empathetically-captured scenes and beautiful archival materials, this films constructs an alternative space where the history and the present of Roma can find a home, on its own terms, which alre alternately poetic and urgent. (by Mona Nicoară)

“The Alley” is a typical Bucharest neighbourhood. Gelu B., Cerasela and Valerică Silicon are three teenagers from the Alley who take part in a televised game-show, called “Stereotype Alley.” The show is focused around stereotypes that transform, spread, are ignored, breed tragedy, but also comedy, get rejected, embraced, normalised or blamed. The contestants use elements of slam-poetry, hip-hop and contemporary dance in order to describe different forms of discriminations such as racism, sexism or homophobia.

“Stereotype Alley” is a theatre play by Playhood

Text and stage direction by Mădălina Dorobanţu and Ionuţ Oprea

What is Playhood? Playhood is an educational project addressed to children and adolescents who live in the Bucharest neighbourhood of Ferentari. They attend free drama classes, video-editing and sound production workshops, creative writing or storytelling sessions and personalised mentorship activities.

The performance will start after the screening of the film "A lua platz" and is part of a series of events in which we celebrate the history and culture of Rome people!