Nomad: In the Footsteps of Bruce Chatwin 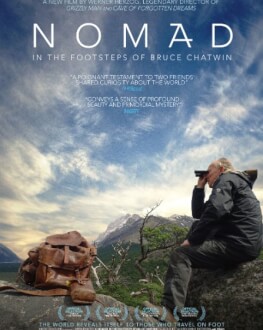 The film will be preceded by CineTalks, a discussion with Irina Margareta Nistor and Costin Miu, about Chatwin, Herzog and Patagonia, moderated by Andreea Pietroșel (30 minutes). Access to the site starting 5:30 PM. Wearing a face mask (medical or non-medical) during the entire event and using hand sanitizer upon arrival to the site are MANDATORY!

Synopsis: When legendary writer and adventurer Bruce Chatwin was dying of AIDS, he summoned his friend and collaborator Werner Herzog, asking to see his recent film about tribesman of the Sahara. In exchange, as a parting gift, Chatwin gave Herzog the rucksack he’d carried on his travels around the world. Thirty years later, carrying the rucksack, Herzog sets out on his own journey, inspired by their shared passion for the nomadic life. Along the way, Herzog uncovers stories of lost tribes, wanderers and dreamers.

He travels to South America, where Chatwin wrote In Patagonia, the book that turned him into a literary sensation, with its enigmatic tales of dinosaurs, myths and journeys to the ends of the world.

In Australia, where Herzog and Chatwin first met, Herzog explores the sacred power of the Aboriginal traditions which inspired Chatwin’s most famous book, The Songlines. And in the UK, in the beautiful landscape of the Welsh borders, he discovers the one place Chatwin called home.

Told in Herzog’s inimitable style, full of memorable characters and encounters, the film explores the creative and personal vision he shared with Chatwin: a passion for the power of storytelling and desire to find insights into human experience among communities at the extremes. A portrait of one of the 20th century’s most charismatic writers, the film also offers a revealing personal insight into the imagination and obsessions of one of the world’s most visionary directors.