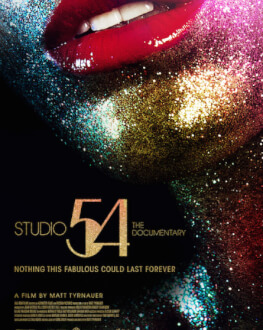 Studio 54 was the epicenter of ’70s hedonism—a monumental magnet for beautiful stars, casual sex, and mounds of cocaine, a den of excess that defined its own rules and enshrined the ostracized, queer, and fabulous. Matt Tyrnauer (Valentino: The Last Emperor) chronicles the rise and fall of this nightclub’s founders: two best friends from Brooklyn, Ian Schrager and Steve Rubell, who conquered New York City only to have it crumble before their eyes.

With rare footage, a parade of colourful patrons and staff, and brutally honest interviews with Schrager himself, Studio 54 is a riveting study in contradictions. Inside the palatial theatre-turned-disco, the crowd revelled in an atmosphere of total acceptance, whether drag queen, octogenarian, waiter, or celebrity. Yet outside, a frenzied, excluded mob yearned to be noticed by the doorman and ushered into the sanctum of pulsating love. Schrager and Rubell’s glittering creation sprang from carefree naiveté and unbridled ambition—yet those same instincts managed to destroy it. This bracing story reveals how even the most culturally potent and transformative phenomena can be vulnerable and fleeting.

“Thrilling and definitive. Studio 54 was like a slice of ancient Rome on 54th St., so bedazzled by its delirium that it now looks almost innocent.”– Owen Gleiberman, VARIETY

“Captures the comet-like excitement of the disco run by Steve Rubell and Ian Schrager for under three years in the late 1970s.”– John DeFore, HOLLYWOOD REPORTER

“A glorious picture of a kind of hedonism and egalitarianism we may never see again.”– Les Fabian Brathwaite, OUT MAGAZINE

“A treasure trove of archival videos and a dynamite soundtrack.”– Les Fabian Brathwaite, OUT MAGAZINE

“Ace documentarian Matt Tyrnauer...understands and conveys exactly why the club connected, at that particular moment – how it was fueled by the ying/yang, introvert/extrovert dynamic of its co-owners, and how its potent dance floor cocktail of personalities, classes, and sexualities offered up to its patrons escapism, inclusion, acceptance, and access. A bewitching story, briskly and wittily told. ”– Jason Bailey, FLAVORWIRE