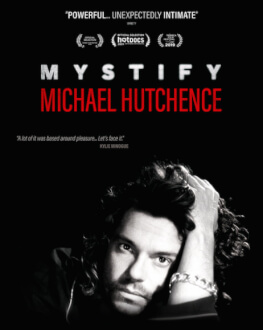 ENG: A powerfully intimate and insightful portrait of the internationally renowned INXS frontman, Michael Hutchence. Deftly woven from an extraordinary archive of rich imagery, Michael’s private home movies and those of his lovers, friends, and family, the film delves beneath the public persona of the charismatic ‘Rock God’ and transports us through the looking glass to reveal a multifaceted, intensely sensitive and complex man. For an all too brief time, we revel in Michael’s Dionysian beauty and sensuality on stage and off. We listen to the range of his extraordinary voice and witness the charmed way he travels through life as he is propelled to world acclaim. But Michael struggled with the idea of success, the creative limits of pop stardom and how to express his integrity; a longing that shaped his life and music and gave birth to a desire to go far beyond the constraints of pop. A violent event strikes Michael and changes his life forever, fracturing his sense of self and robbing him of his connection to life. Made vulnerable, he is unable to navigate the complex challenges he faces moving forward and he has little defence against the onslaught of tabloid press that descends upon his world. Amidst the encroaching darkness, Michael’s new-born daughter, Tiger, becomes his one bright light.
Those who were closest to him are interviewed for the film, including Helena Christensen and Michele Bennett (neither of whom have ever spoken publicly about Michael until now), Kylie Minogue, Kathy Lette, Bono, Garry Gary Beers, Andrew Farriss, Jon Farriss, Tim Farriss, Dennis Farriss, Tina Hutchence, Rhett Hutchence, Susie Hutchence, , Ananda Braxton-Smith, Belinda Brewin, Chris Bailey, Nick Conroy, Gary Grant, Erin Hamilton, Dr Rachel Hertz, Nick Launay, Leslie Lewis, Lian Lunson, John Martin, Jenny Morris, Chris Murphy, Kirk Pengilly, Chris Thomas and Martha Troup.
It features personal footage filmed by and courtesy of Michael Hutchence, Kylie Minogue, Michele Bennett, his family - Kell Hutchence, Susie Hutchence, Rhett Hutchence and Tina Hutchence, INXS bass guitarist Garry Gary Beers and others.

★★★★ “A beautifully made documentary” - Margaret Pomeranz, FOXTEL On Screen
★★★★ “Mystify is a terrific documentary, and as complete a portrait of this talented singer as you could wish” - David Stratton, The Australian Review
“Essential viewing” - The Hollywood Reporter
“Powerful” - Variety
“Mystify is a more than worthy tribute.” - Screen Daily