EN: This is the story of Romanian avantgarde jazz band Creativ, started by pianist Harry Tavitian. Together with percussionist Corneliu Stroe, he is the creator of a unique brand of jazz with ethnic influences, popular in the 80s.

During the darkest times of the Ceaușescu regime, these artists became the symbols of freedom through jazz. Their music could not be marketed through the state-owned record company, Electrecord, so recordings were sent illegally to England, to one of the most acclaimed jazz producers of the 80s. Two Creativ records were released a few years later.

Creativ is a film about friendship, freedom and music without borders. Built as a collage, the documentary blends never-before-seen images, new videos and animations. 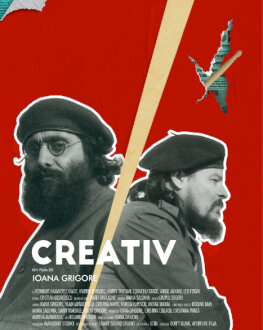