TALKING ABOUT THE WEATHER 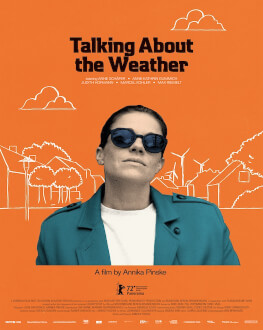 Clara has made it: she has got away from her native provincial East Germany, now living an independent life in Berlin, teaching philosophy while finishing her Ph. D. Between her professional ambitions, an affair with one of her students and her demanding friendship with her thesis advisor Margot she barely has time for her family. When Clara visits her mother for a weekend with her 15-year-old daughter Emma, she finds herself confronted with her ideal of an unfettered, self-determined life and the price she must pay for it.

Annika Pinske grew up in Frankfurt/Oder (Germany). Parallel to her studies in philosophy and literature she worked for theatre director René Pollesch, followed by a creative assistance to German film director Maren Ade (Toni Erdmann). In 2011 she started studying film directing at the German Film- and Television Academy Berlin (DFFB). Her short films were awarded and screened worldwide, such as ANYWAYS (Nomination German Short Film Award 2015) and HOMEWORK (Winner German Short Film Award 2016). TALKING ABOUT THE WEATHER is her graduation film at the DFFB.