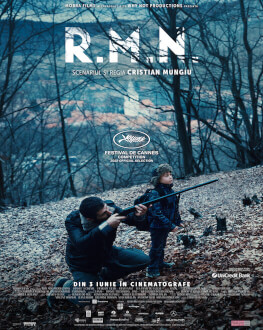 A few days before Christmas, having quit his job in Germany, Matthias returns to his multi-ethnic Transylvanian village. He wishes to involve himself more in the education of his son, Rudi, left for too long in the care of his mother, Ana, and to rid the boy of the unresolved fears that have taken hold of him. He’s preoccupied with his old father, Otto and also eager to see his ex-lover, Csilla. When a few new workers are hired at the small factory that Csilla manages, the peace of the community is disturbed, underlying fears grip the adults, and frustrations, conflicts and passions erupt through the thin veneer of apparent understanding and calm.

Cristian Mungiu is a Romanian filmmaker born in Iaşi, Romania in 1968. His debut film, OCCIDENT (WEST), was premiered in Directors’ Fortnight in Cannes in 2002 and was an audience hit in Romania. In 2007, his second feature, 4 MONTHS, 3 WEEKS AND 2 DAYS, was awarded the Palme d’Or in Cannes. The film later received several awards as best film of the year from various international associations of film critics. It also won the European Film Academy awards for best film and best director.