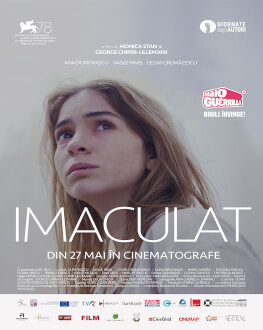 When young Daria, at only 18 years old, reaches in a rehab clinic to get rid of her heroin addiction, her innocence saves her from the advances of the men inside and surprinsingly they offer her protection. Admired and protected by all, Daria enjoys the attention, until she finds out that any special treatment has a price. “Imaculat” is a psychological drama, the main character ends up being subjugated, while the interventions of the medical staff, happen exclusively in extreme situations. The film tells us a story of survival to a point, then it becomes a story of liberation.

Monica Stan has a background in psychology. She has been working as a screenwriter for many years. IMMACULATE is both a personal story and her debut as a director.

George Chiper-Lillemark is a director of photography and director living in Copenhagen. He has photographed numerous feature and short films, including Touch Me Not (2018) by Adina Pintilie. He also co-directed the short The Sandpit #186 (2009) with Adina Pintilie and The Man who would be free (2019) with Mihai Mincan. His short The Palm Lines (2009) was screened by Locarno and Rotterdam IFF.